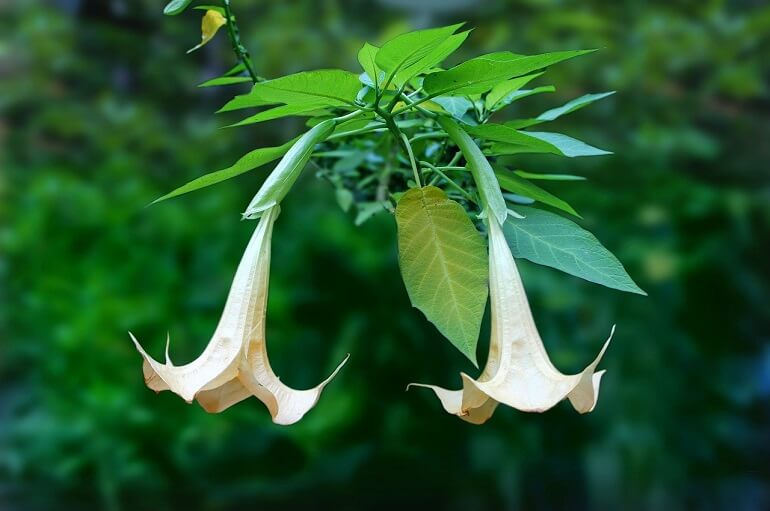 How to Grow and Care for Angel’s Trumpet (Brugmansia)

Brugmansia, part of the Solanaceae family, has some 105 plant genera including some well-recognized plants like potatoes and tomatoes. Their common name is Angel’s Trumpet, this becomes apparent when you see their flowers.

Years ago they were all part of the Datura family, however, in 1974 Datura and Brugmansia was formally separated. The obvious difference of Datura is that they have upright flowers and many have furry trunks with spiny seeds. Brugmansia however has pendulous flowers and spineless seeds and apart from a down on young growth they have bare stems.

The flowers which open fully in the late afternoon and stay open overnight pollinated in the most part by moths. They come in colors ranging from pure white to dark pink and even reds. Another reason for them being grown is the amazing scent they produce.

Do be aware though that all parts of Brugmansia are poisonous if ingested. The nectar from the flowers also has hallucinogenic properties. This made them of considerable interest to the Victorians who were the first to grow them in any quantity in this country. The ladies holding their cups of hot tea under the flowers, which with the extra heat made the nectar flow much easier and dripped into their tea.

They are a large bush/small tree in their native land of South America along the Andes. Best suited in the UK to being container-grown, this also has the effect of root compaction and so long as there is sufficient water and nutrients makes them flower sooner and for longer.

Growing Brugmansia from seed can be a challenge. The seeds themselves look shriveled slightly elongated and with a rough texture to them.

Germination can be within a few days to several months, the quickest I have had one germinate was within a week and the longest about 3 months, so there are no rules with them.

Soaking in warm water for an hour can help to soften the outer shell of the seed and speed germination, in a very similar way to sweetcorn, beans, and Sweet peas.

The alternative is to put them into a propagator in moist compost and keep them in there until germinated.

Don’t expect them to be in flower that first year, they won’t. If given the right growing conditions the following summer should see sufficient growth to get some flowers.

As with any seed-grown plant, they will never come back true to their parent (if they do my suggestion is to buy a lottery ticket straight away).

Pot them on when large enough to handle into a good soil & peat-free potting compost. Keep them in a warm and protected environment i.e. greenhouse and water freely.

My preferred method is softwood, this is when the parent plant has started new growth in the spring and is sending out shoots up its trunk. Taking these is also beneficial to the parent plant which is attempting to put all its effort into growing all these new shoots.

Softwood cuttings can be taken from shoots that are 3 to 4 inches (7 to 10cm) in length. At the base of the new shoot, try and get a heel of old wood; this helps with the rooting. On the parent plant, you may notice that the trunk has small white or pale blotches. These are points that will root easiest.

That’s why I recommend taking some of the hardwood. Cut off some of the lower larger leaves and use a pruning knife to cut the top half of those leaves left on the cutting. Doing this aids the cutting as it at this point has no roots to absorb enough moisture. Using rooting hormone can be of help, but so long as you have base heat and keep the compost moist than a week to two later they should have small roots starting to nourish the young plant.

Gently pot in up and don’t forget to label them, as they all look very similar and without flowering are practically impossible to identify.

For hardwood cuttings, you should take these in mid to late summer. Use a good pair of secateurs and cut a mature and preferably straight piece of stem. Always choose a length of stem that has the small pale blotches also known as pre-roots, nubbies, or lenticels. These are the points where roots will form from, unlike other plants where you would normally take a cutting with a heel or a leaf joint to ensure (as much as possible) to get a new free plant.

As with softwood cuttings slice the top half of the leaf off, this helps the stem retain as much moisture as possible. The rooting hormone helps, whether it be in liquid or powder form, but it’s not necessary. What is though is to keep the new cuttings moist but not soggy and provide base heat.

Given these conditions in a week or two they should be producing new leaves, this is sure sign that it’s time to pot up your cuttings.

Pot up in good soil and peat-free potting compost and keep in a warm well-protected place until it’s warm enough outside.

Other ways of getting plants are to use the hydroponic method, which is following the hardwood cutting method up to the point where you put the cutting into compost. Instead, put them into a glass or jar so that about a third of the cutting has water around the base, roots should readily be produced from the white patches on the stem.

Leaving them outside all year is a definite no-no. Unless you live on the channel islands or the Isle of Scilly. Do remember they come from a hot and humid environment of the Andes in South America and don’t cope at all well with sub-zero conditions.

They need copious amounts of water, they, like banana plants are used to having an almost endless supply of water and need this to grow strongly and produce their super-sized flowers.

They hate strong winds, keep them in a protected south-facing position if at all possible. This will give them the best chance of flowering. And will ensure that any flowers produced don’t get damaged.

Be patient with them. Some cultivars are more ‘needy’ to get them to flower. The best way is to start with one of the common varieties that you can find at most garden centers or nurseries that don’t specialize in them.

Be prepared to spend time to water and check them not only during the growing season but also overwinter and into spring.

There is a list of pests that find Brugs appetizing and will readily set up home to raise the kids on one (Check out our natural methods to fight off pests).

The peskiest of the pests is red spider mite, even if you keep their growing conditions at high humidity (which normally deters these critters) they will colonize a plant.

The way to know they are in the discoloration of the leaves, instead of being a vibrant green they start to turn yellow and the plant will go into shock at not being able to combat them.

Organic methods can help, there are many suppliers who will be happy to sell mite eaters.

Another way of combating them is to use a few drops of mite killer as used in aviaries, these are supplied in small bottles with a pipet inside the cap. Put a few drops into a mister and top up with water, give a good shake, and mist thoroughly. Not just the affected area but the whole plant, ensuring that you spray the under-side of the leaves.

Repeat this process every 2-3 weeks about 3-4 times. This will break the reproductive sequence of the mites, and so long as you don’t introduce any other plants that have them they should stay under control.

Aphids will also make a pest of themselves but will be much less of a problem and they are easier to see and control.

Slugs and snails will also munch on them, the tell-tale signs are holes in the leaves, particularly the young leaves, there are many ways of getting rid of them. You can use the age-old method of beer in a glass sunk near them, nematodes, or one of the many other ways.

There are almost too many to list, within the seven species and literally hundreds of cultivars that have been bred with different colored flowers and leaves over the years.

Just a few that I have are Theas Liebling, Angels Phenomena, Angels Proud, and Angels Flight.

There are also different flower types as well, singles are one flower with stamens and anthers in the upper part of the flower, and insects are the easiest to gather nectar from.

Then there are the doubles, some have flowers that are basically like a single with several single blooms within one another. The other is a true double, one flute and ruffles with the flute.

As with all flowering plants, scent varies depending on their parentage and current climatic conditions, and where they are placed in your garden. However, almost all of them have scents but don’t expect them to be producing this during the day. Brugmansia open their flowers in the late afternoon and in the evenings can make sitting outside a pleasure with their heady scent wafting in the breeze.

I keep all my large and established plants in a greenhouse to overwinter. (Read our greenhouse building guide).

I start their hibernation by letting them experience a little bit of frost at the end of autumn. So long as it’s not a heavy frost this has the effect of stopping further growth and telling the plant to stop growing.

Once done I remove all their leaves, so it’s easier to keep a check on them in the early part of winter and won’t be a hiding place for pests and diseases.

Keep them frost-free, and if you have some form of heating so much the better particularly on the coldest of nights. Keep a regular check on them throughout the winter by checking them at least once a week.

For unheated greenhouse storage, the plants will have some die back from the ends of the stems, this inevitable. However, there is an easy way to check that they are still alive by using your thumbnail and just puncturing a small part of a stem, if it’s green they are still alive.

For heated greenhouses, I would still recommend at least a weekly check, although they will have a much better chance of surviving the British winter. They will also start to produce new buds earlier in the spring.

As with all tropical plants, it’s not so much the cold weather that kills them it’s the wet and cold combined. By reducing the watering over winter you will again increase their survival rate. This doesn’t sound logical, however, it is a tried and tested method.

Once spring starts to show signs of arriving, gradually increase watering. Along with the extra hours of daylight will start the plants into new growth.

Now that your plant/s have new growth on them, keep them frost-free. The late frosts can do more damage than overwinter ones. From personal experience, I would delay moving them outside until late May at the earliest.

Not only does this ensure that all chance of frost is over, but will give them a higher chance of producing flowers earlier in the summer.

Brugmansia will also benefit from regular feeding throughout the summer months, liquid seaweed/sequestrate is ideal for them, feed them once every two weeks until about the mid part of August. This will sustain the plant during its height of growing and flowering. If you are lucky enough to have a warmer climate than on the Chilterns then continue feeding into September.

How to Grow and Harvest Pumpkins

How to Grow and Harvest Potatoes